The name Mantecados FELIPE II is not the result of an arbitrary commercial decision. The origin of this unique jewel of Spanish confectionery possibly dates back to the time of the Reconquest, before the discovery of the Americas.

There are literary references and traditions that very possibly indicate that this mantecado was the succulent delicacy offered on a special occasion by the Count of Benavente to his Lord Don Felipe (Philip) II, “The most famous King of Spain” and his august wife Isabel of Valois (the Great Love of Felipe II).

This distinctive sweet from our Golden Age’s varied confectionery, made from wheat flour, icing sugar, lard, [in Spanish “manteca”], which gives it the name of “mantecado” , and Marcona almond flour, was handmade in small blocks. Over time, the size of the mantecado was reduced and it was wrapped in tissue paper.

That is how it was presented, already at the dawn of the twentieth century, at the 1903 Madrid International Exhibition It was there that it received the highly prized “Gold Medal” award together with a First-Class Diploma of Honour.

It is the only time that a mantecado from Spain has received such a prestigious award.

Since 1909, Mantecados Felipe II has been the first and oldest mantecado registered® at the Spanish Patent and Trademark office of the Ministry of Industry, Commerce and Tourism.

In his 1944 book “Felipe II en El Escorial” [Philip II in El Escorial], José María Peman, member of the Royal Academy of the Spanish Language, defined this “flagship” of pastries as the “apotheosis of confectionery”. 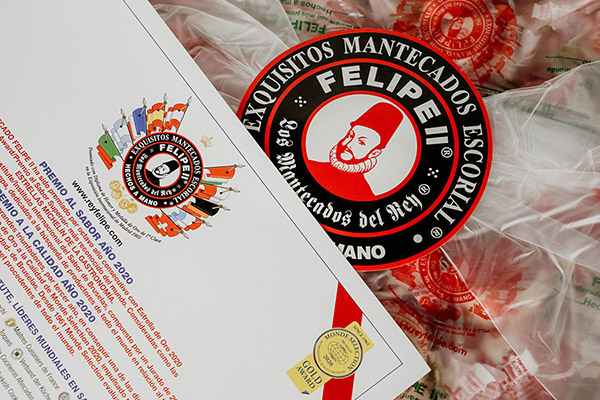 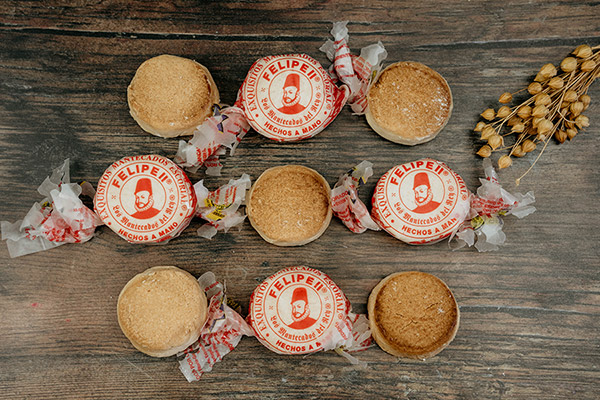 Their traditional artisanal production, faithfully preserved generation after generation, has earned them the highest honours, making them a privilege and a legend.